Choose which rooms to add to a dangerous temple while exploring its secrets and trying to escape.

Don't worry, a ghost friend is there to  help you. For a price, of course.

Though please let's not spawn in those green dudes right next to the entrance in the treasure room, they could insta-hit anyone who just came in ;^^

Reply
G E B1 year ago

nice game, i died because of a bug that you cant walk after shooting with some kind of sniper, other than that,amazing!

This is a pretty good game. Great art and each run is different every time. The music and sound effects are pretty good too. I like playing it till the end. Great work!

Are your attacks different each time?

This is a really fun one, with a great idea! The art is really nice too. Two suggestions though

1. A clear indication of when the character can shoot again would help. I had trouble timing my shots because there was no clear way to figure out when I'd be able to shoot again other than just feeling it.

2. A way to quit the game? Maybe I'm just stupid or hit a bug or something, but I tried a lot of buttons looking for a close game option somewhere. Couldn't find one. Had to tab out and manually close the window.

Hi hi! So a really love the game :) super addictive!!

had fun! Wish it had a save though. Still fun!

i love this game

I love this game, very adddicting

Good game soo far!! The art is like BofI i personally like it very much! I won the game but keep waiting for more :D keep the good work!!

Thanks a lot for supporting us and playing Chamber! <3

I really, really enjoyed this game, very cool concept, a more fleshed out version would be awesome, keep up the good work!

Wow! Thanks for the gameplay video <3
We are happy to know you enjoyed playing Chamber

Same, I want a full indie game of this

I like this game a lot, it's the first one on the video, didn't speak too much about it but it's lovely, still playing it sometimes.

Woww thanks a lot for mentioning Chamber on your video <3
we really appreciate it!

This is such an enjoyable and addictive game. I love the variety in it and the thought and attention to detail you’ve put into this. Beautiful graphics and nice audio. I’ll certainly be playing this for days to come!

Omg, thanks a lot for your support and review <3

No worries at all! I really enjoyed the game, but unfortunately I was rubbish at it! I’ll keep playing until I finally manage to crack it! 😉

So, now that I beat it, here's some of my opinions:

This game is surprisingly addicting, and a lot of the mechanics were pretty clever, though I still have some small things I'd change. First of all, towards the end of a run the game can get a little repetitive, which I guess is just due to the nature of the game. A few of the rooms are also clearly worse or better than others. Think the zombie room, fountain ofc, and the bombs room (I don't like the bomb room). The main that's missing imo is the feeling of your character themselves improving, which is often one of the most fun part of a roguelite. I suppose you could do this with some ability you get a number of limited uses for whenever you pass room x, which might also help in the repetiteveness department.

Thanks for letting us know your experience with Chamber <3 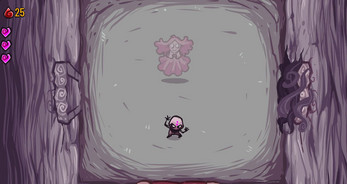 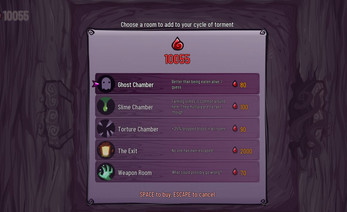 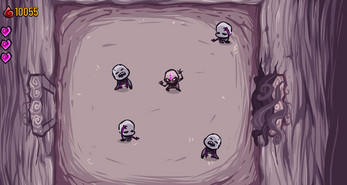 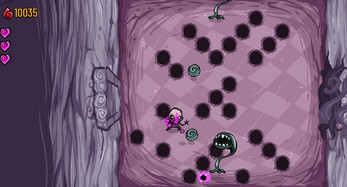